‘A RACE AGAINST TIME’ PLAN D – ON THIN ICE

“We are the Pilgrims, master, we shall go always a little further: it may be beyond that last blue mountain bard with snow, across that angry or that glimmering sea”. James Elroyd Flecker

‘We entered the battlements of the ice castle and into the breach hoping to punch our way through…only to be stopped in our tracks with high ice walls which we had to get over, this was a nightmare! Both physically and mentally draining…’ 20th April 2016 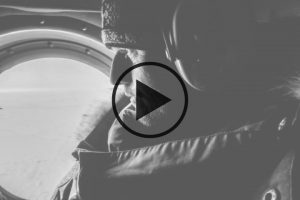 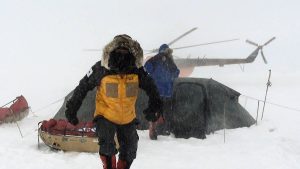 We landed safely with a bump onto the make-shift Arctic sea-ice runway, at the Russian Base, they called Barneo.   We stepped out of the cramped Antonov plane into what was a chilly -30 degrees, only to be ushered to a mess tent, guarded by a Russian soldier in his camouflage whites, to wait for the helicopter call. It was still daylight, but the early hours of the morning, and something we had to re-adjust to. Luckily we could grab a quick cup of tea and discuss our final preparations, before hearing the sound of the Russian helicopters as they landed nearby. We moved out to grab our pulks and loaded them onto the crude cargo helicopter. This was it!

The helicopter spluttered into action, with the huge noise and shuddering motion of the blades rotating above, shaking the body as we started to lift off and move in the direction of our drop-off point. We had a couple of hours in this tin can, and as I looked down I could see from high above, the impact and devastation of what could be climate change. Something of a white patchwork quilt, destroyed by broken ice fields, expanses of open water, and huge cracks. And we were going to land on this! 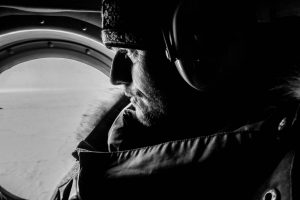 We landed with the helicopter blades still turning, I suppose just in case we were on unstable ice…we offloaded our kit and shook the hand of the Russian Commander who said in broken English ‘see you at the North Pole!’   I could not resist but to immediately raise the British flag which was secured to my ski pole and wave it at the Ruskies as they took back off. I wasn’t sure what they thought of us ‘crazy’ Brits, but I simply wanted to make the point that this was a British expedition, and after three years we are going to make this happen… I felt that this was actually a moment of success and elation, just to actually be on the Arctic Ocean alone as a team with what we had set out to do. We had actually made it this far, after such a long journey faced with many obstacles.

We had about six hours of rest and were up to start at 1400hrs (ready to leave for 1600hrs) for our first day on the ice. Routine is key and plays a critical part in all our lives in coping and getting through the day. Without routine, we would not get anywhere! On our expedition, routine helped enormously as we chipped away at the miles every day in the attempt to reach our goal.

We couldn’t afford to have a day of rest, even if it was required, as we had to keep moving and make the most of the available time to get to the Geographic North Pole. There were long days on the ice. Our routine grew slicker and slicker with every passing day. Within a short time, we had worked out our system, developing the basics of setting up the tent and our daily routine, all from what we had established during the South Pole expedition and our training. 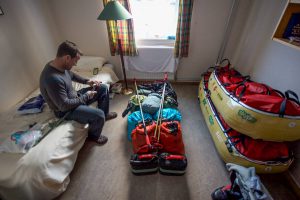 Nevertheless, the experience in the South and our training could not prepare us fully for the environment of the North Pole. I still maintain that this environment is the harshest one known to humans, especially with climate change and the way the ice is breaking up. It creates an enormously challenging terrain. Every few hundred meters we were faced with walls of ice rubble. This is where ice crashes into other ocean ice and rides up, creating more ice rising up and up. I would say that after every 100 meters we would be faced with a huge barricade of ice which we would have to climb over. This was not thin ice, but boulders of huge thick ice blocks which we had to find our way through, looking for the weakest point and creating a route over the rubble. This could involve removing our skis, securing them to the pulk, and then man-hauling the pulk over a wall of ice, all the time being careful not to injure ourselves or damage our equipment. This all took time and had to be done properly. Sometimes we hit double walls, or we were faced with walls all around us! I remember one time when we had penetrated the initial four or five walls of ice but then found that we were surrounded and trapped in a small football pitch-sized area… and then we lost the sun! In my mind, it was like being trapped inside a castle made of ice. My heart dropped on several occasions and sometimes I wondered whether we would ever get through it! But we soon realized that as a team we had the confidence to get through all of these obstacles and what was being thrown at us. 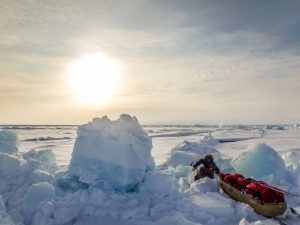 We also had two instances when we saw polar bear footprints. The first was on day four or five when, stepping out of the tent in the morning, we saw these huge polar bear footprints about 3-400 meters away. The tracks were massive, quite literally ‘big foot’, and were not far from our tent. I’ll be honest and admit this caused some worry, and for a while, the hairs stood up on the back of my neck. However, we had to get on with the job and not worry about this, and we were soon back to normal speed, only to find more footprints the following day… 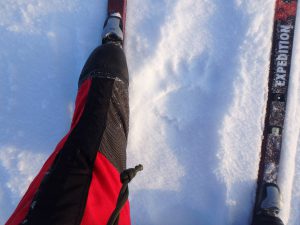 The obstacles that the environment threw at us were relentless and is how I would imagine crossing enemy territory during the war, facing trenches, then barbed wire, then a minefield, then hedges, then more wire… This relentlessness inevitably had an effect on us psychologically, sapping our mental power, but we persevered and eventually got through it. 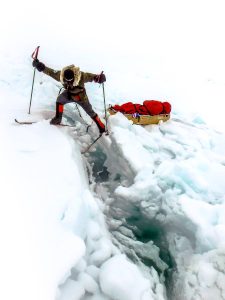 The weather was much warmer than we had expected, hence the problem with the breaking ice. One morning we woke up in our tent and it was literally dripping with condensation, such that we had to strip off to our lowest clothing levels. This was a bizarre experience because we were used to being all wrapped up against the cold. What on earth was happening out there?

We hit another massive expanse of open water (not frozen) and found a place to cross – a bit dodgy but all good. This seems bizarre that only 20 miles from the Pole there is water!! Is this climate change?? 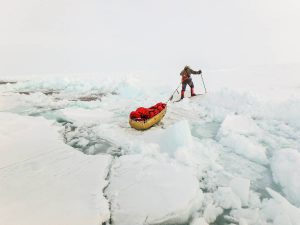 As we got close to what we thought was the North Pole, I consulted my GPS watch and ran around trying to find the specific location. There is a great picture of me holding the watch up and exclaiming with excitement. When we found the Pole, we took some product placement photographs for our sponsors and then set up our tent for refuge while we waited to be picked up. We were in a happy place mentally. With a sense of jubilation, we smoked our celebratory cigars and had a dram of whisky, waiting for the Russians who were supposedly on their way that afternoon to pick us up. So we waited and waited, only to be picked up that evening, and we had drifted over 2 miles on the Arctic Ocean from the North Pole.

We arrived back safely at the camp where the aircraft was waiting. Everyone was rushing to board this aircraft and there was a sense of urgency to get us all off the ice in time. It felt as if the ‘enemy’ was closing in, like something from the film ‘Platoon’, and we had to get on that flight and get out of there as soon as possible. The plane was jam-packed full, we buckled up and soon the jets zoomed us away. As we flew off, I reflected that I never wanted to return to the mess that was the North Pole. I was so glad to get away. I wasn’t scared as such, but I just had a great sense of relief to be off the Arctic Ocean. I felt a sense of relief that we had actually achieved our mission and now just wanted to get out safely. 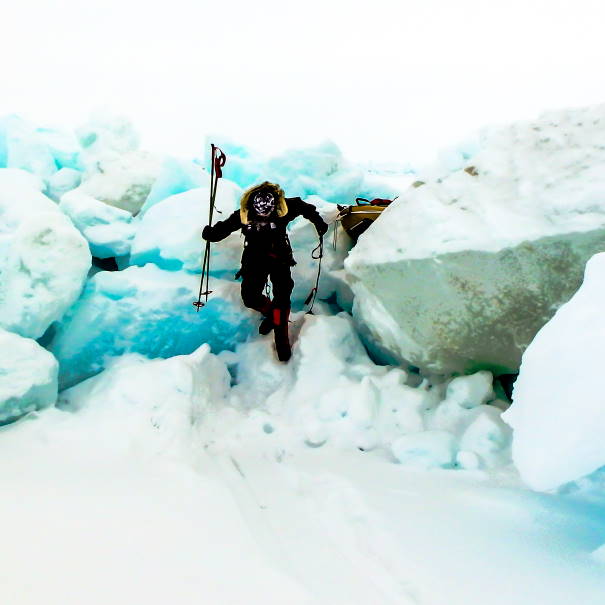 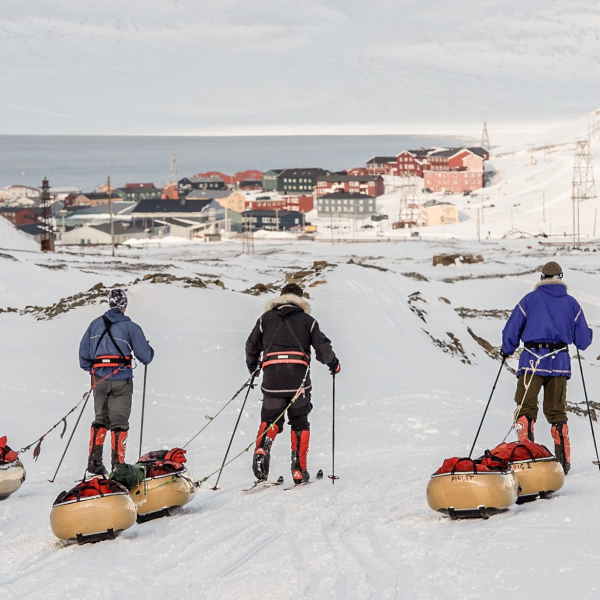 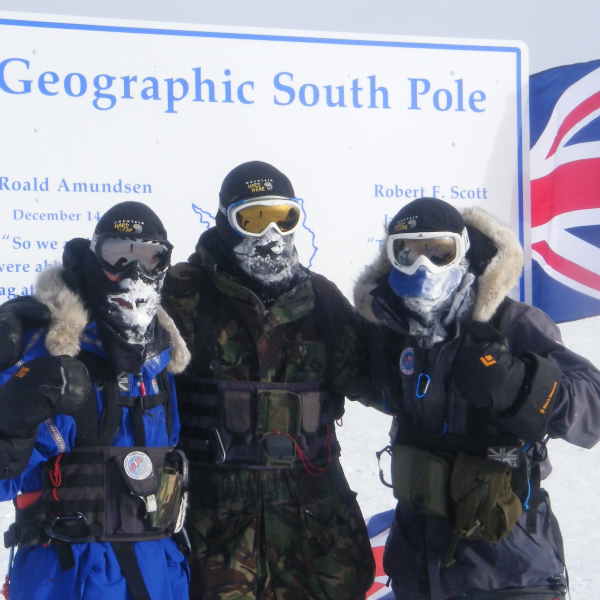 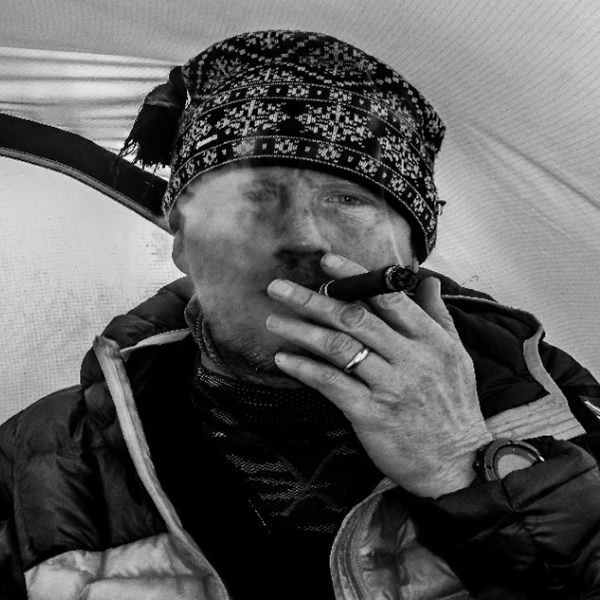